Still fit for 55? The EU’s climate package one year on 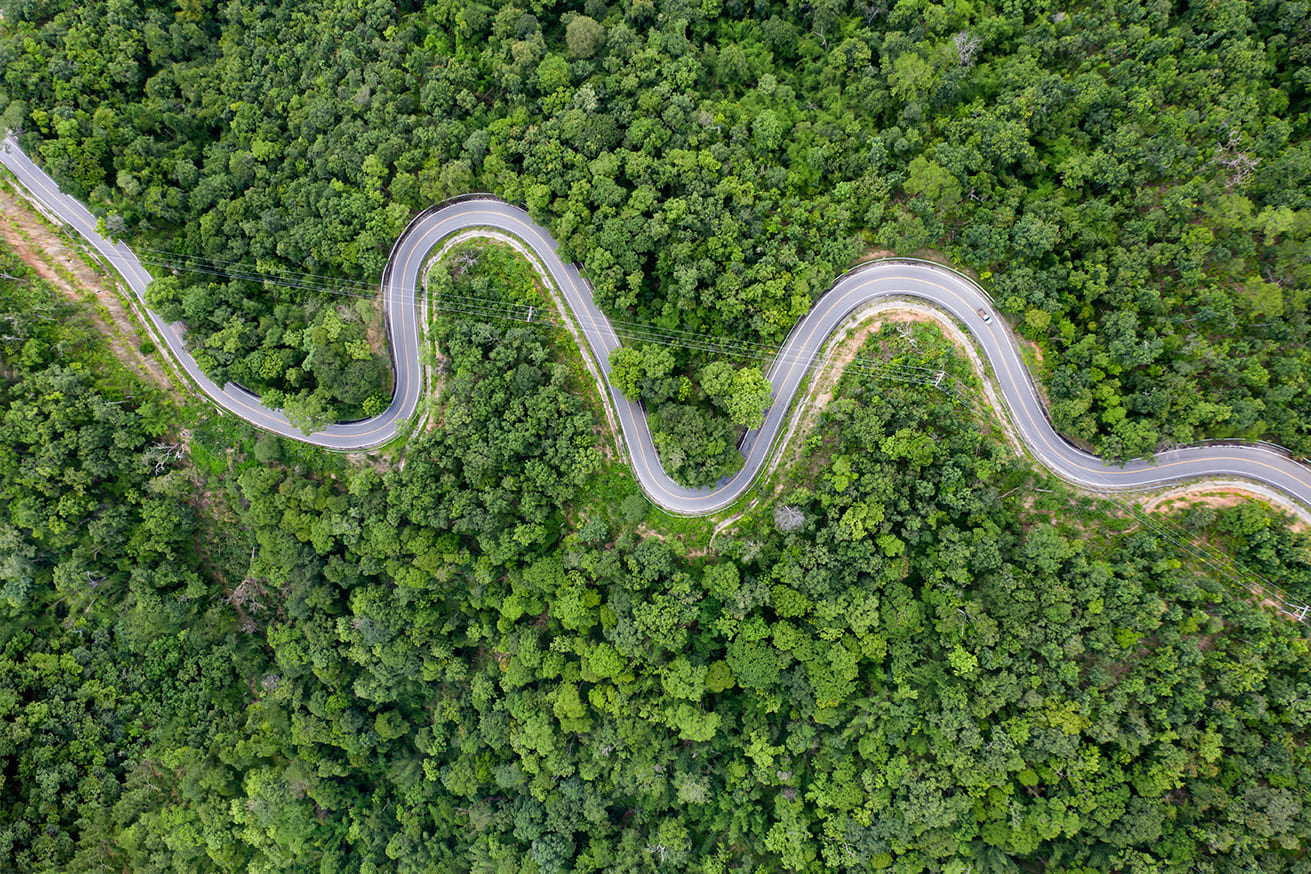 The European Commission (EC) presented its “Fit for 55 package” in July 2021. In this, the Commission proposed the detailed legislative steps to be taken to achieve the first milestone towards its 2050 net zero target – i.e., the net reduction of greenhouse emissions by at least 55% by 2030 from the 1990s level. What has happened to this package? Since July 2021, the world has moved on – first as energy prices rocketed, and more recently, as a result of the war in Ukraine.

With the first anniversary of the “Fit for 55 package” approaching quickly, this Insight looks at the progress made by the Council of the European Union and the European Parliament – the two EU institutions responsible for legislating new laws. We find that initial concerns surrounding European policymakers relegating carbon action to the backseat in the face of new challenges have so far proved unwarranted. Indeed, rather than acting as a brake on the transition, the latest challenges appear to be acting as catalysts for change. We also find that the legislative procedure is still on track and on time. For example, progress has been made on the Carbon Border Adjustment Mechanism even though EU member states have not yet agreed on important issues such as the phase out of free carbon allowances in the EU emissions trading scheme.

Where are we on the “Fit for 55 package”? Understanding the EU’s legislative procedures is crucial

The European Commission (EC) presented its Fit for 55 climate action proposals in July 2021 amid the Covid-19 pandemic and only months ahead of COP26 – the United Nations’ influential Conference of the Parties 26 on climate change. The “Fit for 55 package” is part of the European Green Deal, one of the six EC’s priorities for the 2019-24 legislative period. In its “Fit for 55 package”, the EC proposed the detailed legislative steps to be taken to achieve the first milestone towards its 2050 net zero target – i.e., the net reduction of greenhouse emissions by at least 55% by 2030 from the 1990s level.

Since July 2021, member states have been assessing the proposals on a technical level in working parties, and have been debating them on a political level in the Council, with the aim of agreeing on a negotiation mandate ahead of negotiations with the EP. The EP has been pursuing a similar work agenda within its own institutions. Once both sides are ready, the Council and the EP negotiate a joint position (a process called “trilogues”) with the objective of turning proposals into law. It is then for the EC to implement these legislative acts (see Figure 1). 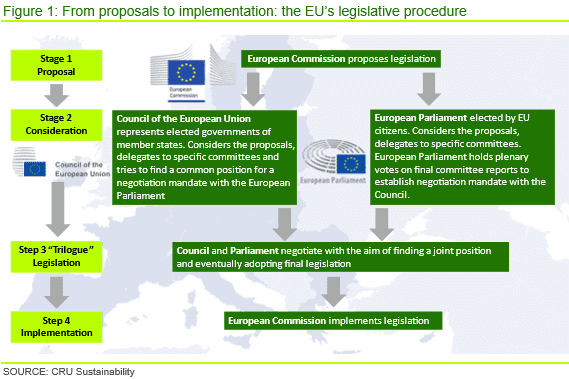 When the Fit for 55 package was launched, it was expected that the proposals would be passed into legislation by the end of 2022. The world has moved on dramatically since July 2021.

The first dramatic development has been the sharp rise in energy prices since mid-2021, which has led to an acceleration in consumer price inflation not seen since the 1970s. The second dramatic development has been the Russian invasion of Ukraine in February 2022, which on top of the human tragedy, has disrupted the global economy in general, and energy and commodity markets in particular.

Have these developments derailed the EU’s climate efforts?

Doubling down on the energy transition: the EU’s response to the new challenges

Rapidly rising energy prices have hit living standards and dampened economic prospects. Policymakers in most EU countries have been concerned about the social consequences and have introduced measures to protect households from the impact. Meanwhile, a number of EU governments have openly questioned the functioning of the EU’s Emission Trading Scheme (ETS) – Europe’s flagship policy to address climate change – arguing that it drives up energy prices even further when households are already struggling. The price for carbon emission allowances on the EU ETS increased from ~€20/tCO2 in early 2021 to ~€90/tCO2 towards the end of the year, feeding into higher industrial production costs. For some governments, now is not the time for more ‘greenflation.’

There were initially concerns that European policymakers, faced with these new challenges, would sacrifice their environmental ambitions to keep energy prices down – for example by suspending the EU ETS or by increasing domestic coal production. This has not been the route taken by European policymakers though, with energy security concerns providing a new impetus to transition away from fossil fuels to renewables as quickly as possible. In its RePowerEU initiative, the EC made it clear in early March that the rapid transition to renewables would play a key role in reducing the EU’s dependency on Russian energy imports. The EC is currently considering whether the share of renewable energy sources in final energy consumption could be increased to 45% by 2030, up from the 40% proposed as recently as December 2021 in the revised Renewable Energy Directive. To reach this new target, the EC is considering treating hydrogen as a renewable energy source. If accepted by European legislators, this would make elements of the “Fit for 55 package” even more ambitious than initially set out.

In the background of the response to the war in Ukraine, European policymakers have been working through the EC’s “Fit for 55” 13 distinct proposals. One of the more contentious proposals is the Carbon Border Adjustment Mechanism (CBAM). In mid-March, the Council agreed on a negotiation mandate ahead of negotiations with the EP on CBAM. CBAM is a cornerstone of the EU’s climate policies, complementing the EU ETS. The Council agreed that products of the following sectors ought to be covered by CBAM: cement, aluminium, fertilisers, electric energy production, iron, and steel. However, the Council also acknowledged that insufficient progress had been made in a number of areas, including the phase-out of free allowances and the establishment of a global climate club. Once these issues have been addressed, the Council wants to start negotiating with the EP (i.e., start the trilogues process mentioned above), after the latter has agreed on its own position.

The EP presented its draft report on CBAM in December 2021, which argues for a faster phase-out of free allowances and a faster phase-in of the CBAM than originally proposed by the EC. Moreover, the draft report argues for an extension of CBAM to sectors such as chemicals, plastics, and hydrogen production, and suggests a compromise on export rebates. The EP’s Environment Committee will vote on it in May, paving the way for the Council and parliament to negotiate the final legislation in the second half of 2022. See Table 1 for the Council and EP’s progress and positions on CBAM. 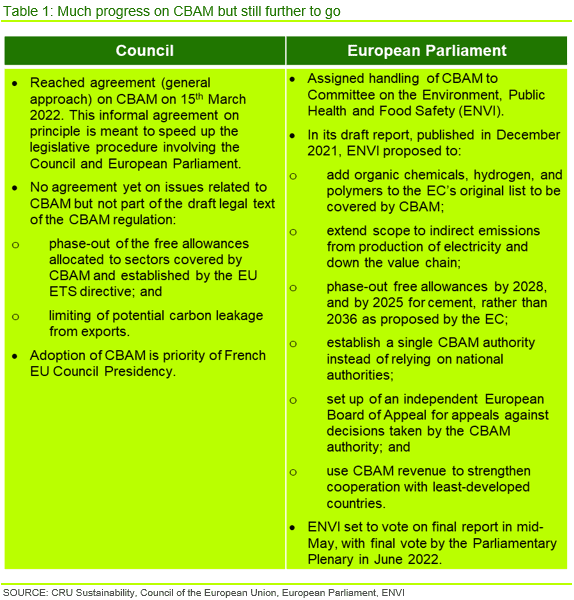 Also in mid-March, the EU environment ministers discussed the proposal to broaden the scope of the EU ETS to cover road transport and buildings by 2026. No consensus has emerged yet. These sectors are currently not included in the EU ETS, but numerous EU countries have complementary national schemes filling this gap. We intend to publish an Insight on the EU’s national carbon pricing schemes soon.

European policymakers are also making slow but steady progress on the other “Fit for 55” proposals (see Figure 2 for a complete list), with both the Council and EP holding technical meetings in working parties and committees, as well as discussing proposals on a ministerial level and in plenary sessions. There are no obvious signs that the war in Ukraine has slowed down the legislative process in any meaningful way. The same is true for the many other initiatives that are part of the European Green Deal but not part of the “Fit for 55 package”. There are nearly 80 such initiatives, from corporate sustainability reporting – to a new forest strategy for 2030. 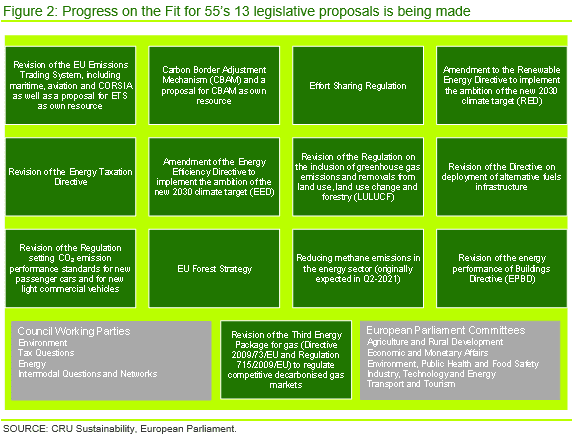 Still fit for 55? If anything, the EU is even more serious about its energy transition than before

Concerns that European policymakers would relegate carbon action to the backseat in the face of new challenges have so far proved unwarranted. Indeed, most EU governments have become even more ambitious to transition to renewable energy sources, spurred on by the twin objectives of reducing carbon emissions and achieving energy security. Rather than acting as a brake on the transition, the latest challenges appear to be acting as catalysts for change. Whether achieving more ambitious targets is feasible is another issue. From lengthy planning processes to labour market shortages, there are many obstacles to overcome.

Other areas of the EU “Fit for 55 package” have been less affected by the recent developments and as such, are progressing more or less as planned, with the Council and EP developing their respective negotiation mandates ahead of the joint negotiations with the aim of adopting final legislation. Given the lengthy processes involved, policymakers might start legislating towards the end of 2022, with the bulk of activity probably taking place in 2023. However, there are no obvious signs that the latest developments have slowed down the process in any meaningful way.

If you would like to find out more about the EU’s “Fit for 55 package”, national carbon pricing schemes around the world or just want to discuss sustainability more generally, please get in touch. We are happy to talk.