Financial speculation in the EU ETS – just a rumour? 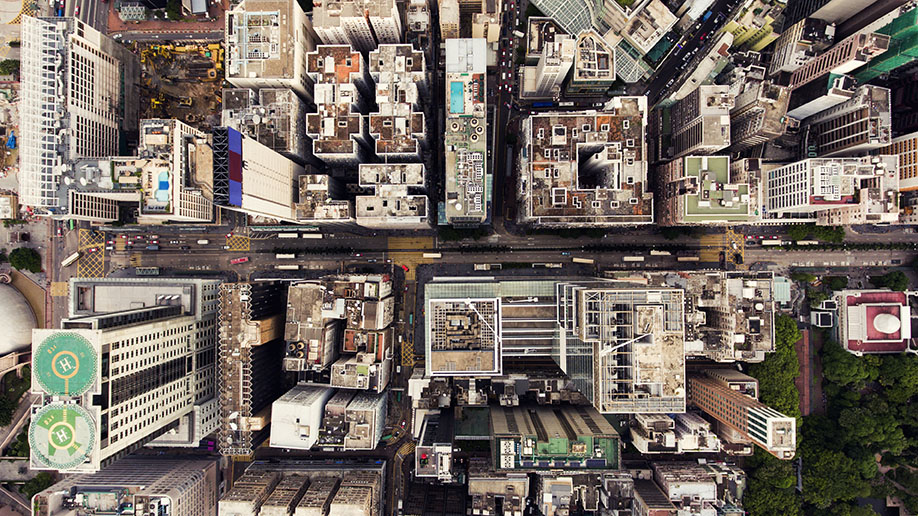 With energy prices rising rapidly recently, policy makers have increasingly focused their attention on the role of financial institutions in the EU Emissions Trading Scheme. In this Insight we look into the persistent rumour that financial speculators have played their part in driving up the carbon price in the recent past. We find little evidence that this has been the case. Our analysis shows that the role investment firms and banks play in the EU ETS hasn't changed notably over recent years while the increased market involvement of investment funds is probably driven more by the prospects for attractive longer-term investment returns than short-term speculatory gains.

EU Allowances as a financial instrument

The European Union’s Emissions Trading Scheme (ETS) is based on the ‘cap and trade’ principle. The European Commission (EC) sets the total amount of emissions permitted (the ‘cap’) and controls the number of EU Allowances (EUAs) – each one equal to 1 tonne of CO2 – to cover those emissions. The cap is gradually being reduced to meet the EU’s climate change targets. Carbon emitters covered by the ETS buy or receive for free these EUAs, which they can trade with one another (the ‘trade’). It is the interaction between the supply of EUAs and the demand for them that determines their price, the so-called carbon price.

Several EU governments have argued that the recent sharp rise in the market price of EUA does not only reflect changing market fundamentals but also potentially speculative activity by financial institutions. Is this possible?

In principle yes – EUA are treated as financial instruments under the EU’s Markets in Financial Instruments Directive II (MiFID II) and regulated by ESMA, the European Securities and Markets Authority. Just like other types of financial instruments these can be bought and sold for purposes directly relating to business activities, for example by carbon emitters, and for purposes of investment and speculation, for example by financial institutions. ESMA differentiates between five types of market participants in the EU ETS market:

Policy makers have focused their attention particularly on investment firms or credit institutions (n.b. in the following referred to as investment firms) and investment funds that, for example, include hedge and private equity funds.

The number of investment firms remained stable between early-2018 and end-2020 but jumped to a higher level in mid-2021 when the UK-based Intercontinental Exchange (ICE), which is the main exchange used by financial institutions, opened its new EU-based operations, ENDEX, in response to the UK’s departure from the EU. Over the same period, the number of investment funds increased from ~100 in early-2018 to ~350 by end-2021, with a first jump in early-2019 coinciding with the launch of the ETS’ Market Stability Reserve and a second, bigger jump in mid-2021 when ENDEX opened and coinciding with the publication of the EC’s Fit for 55 package (Figure 1). One interpretation of this could be that investment funds stepped up their engagement once they had convinced themselves that the EU would be serious about meeting its climate change targets and that this would require higher carbon prices in the future. 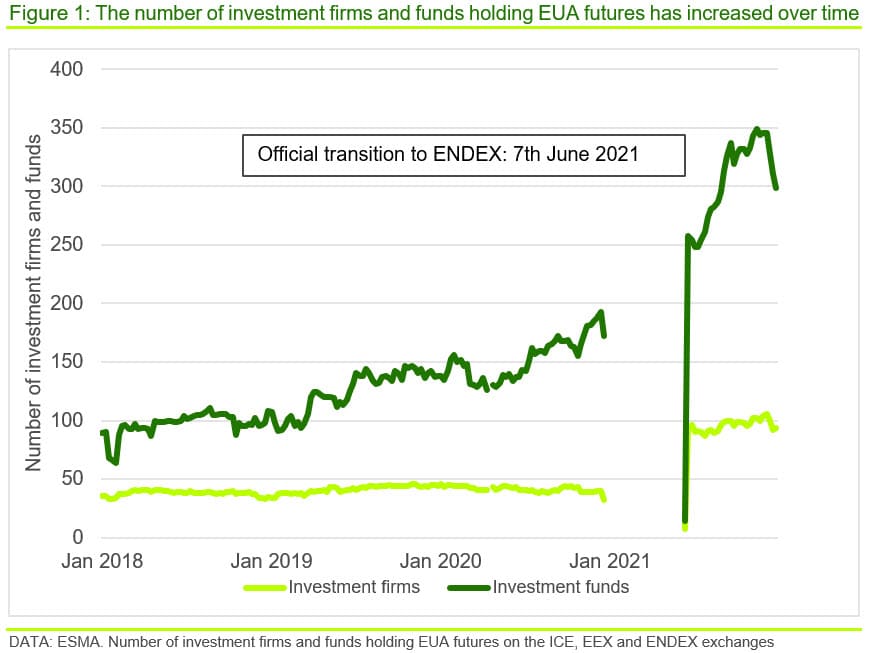 Over the same period the carbon price followed a similar trend to the number of financial institutions participating in the EU ETS (Figure 2). Some policy makers have taken that as evidence that the carbon price has been driven up by financial speculators. 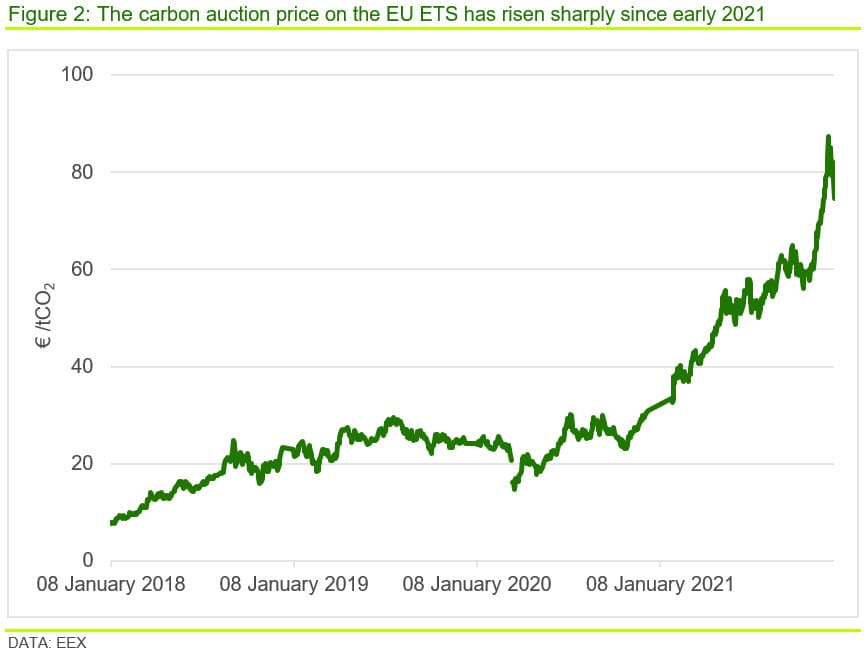 A more useful indicator to assess the importance of investment firms and funds in the EU ETS is their share in the overall number of positions held by all market participants in the futures market. Figure 3 shows that this share increased slightly from ~45% in early-2018 to ~55% in late-2021 on the ICE and ENDEX. 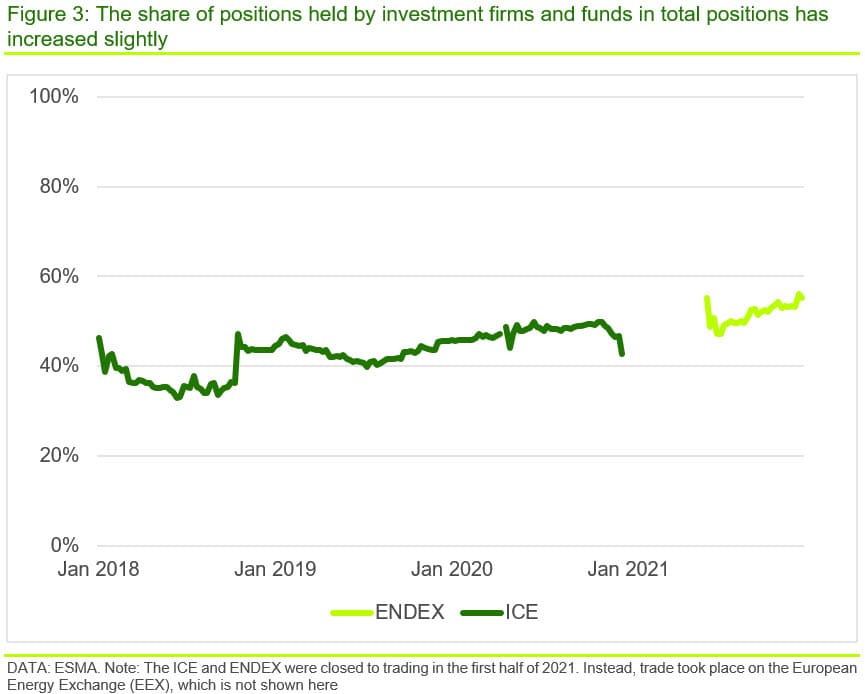 We need to look at the positions held – long (buy) and short (sell) and for what purpose – to assess whether investment firms and funds might increasingly be speculating in EUA. ESMA data show that investment firms overwhelmingly hold short positions for ‘other reasons’, in other words not to reduce risks directly related to commercial activities, and these positions are mirrored by long positions held by operations with compliance obligations and other commercial enterprises (Figure 4). The chart also shows that there is a strong seasonal pattern, with the number of positions going up over the course of a year before being adjusted down again at year-end. This hasn’t changed since ESMA records began in 2018 and reflects the fact that non-financial businesses buy EUA on the futures market to hedge their exposures, while financial firms act as counterparties to facilitate trading and provide liquidity. 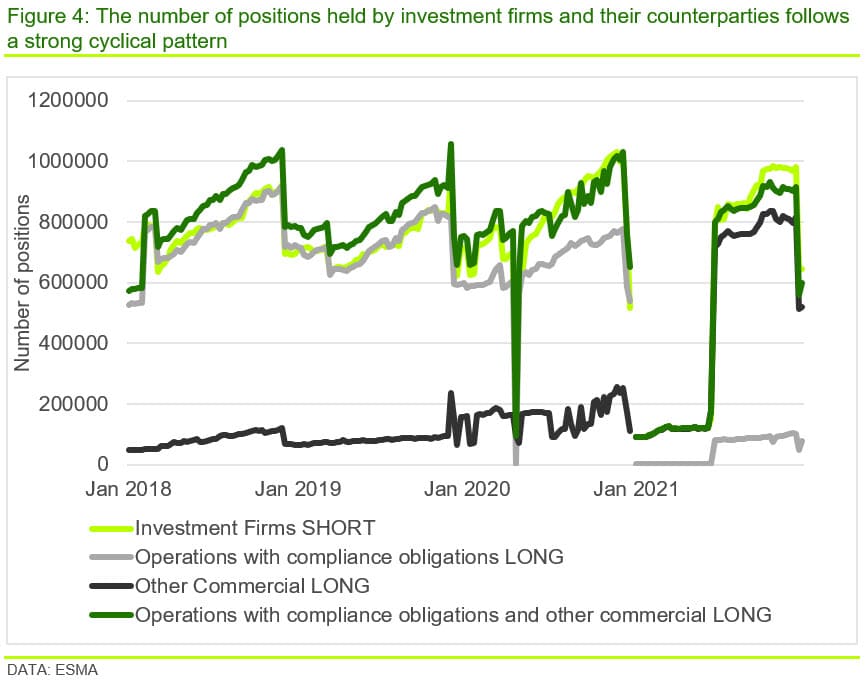 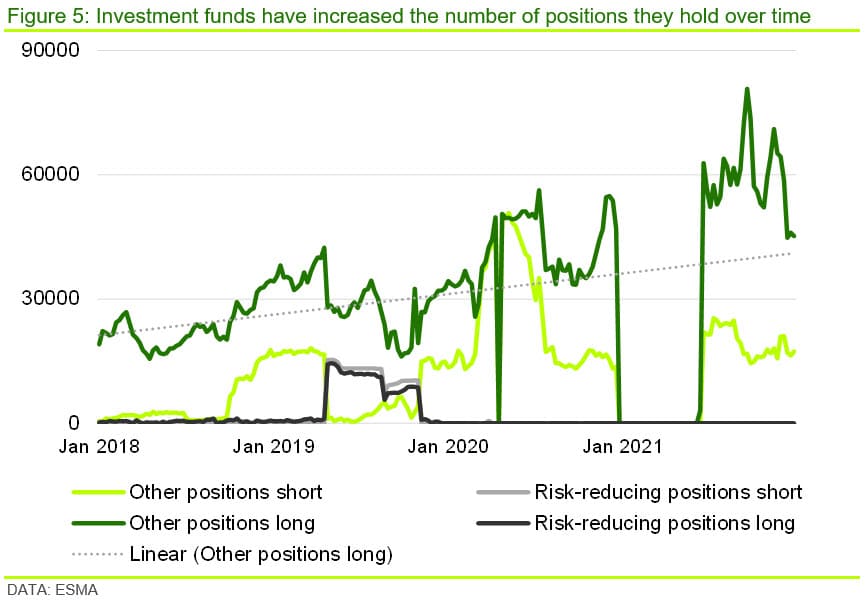 The aggregate ESMA data suggest that financial speculation was probably not a driver of the recent increase in the price of EUA – the carbon price on the EU ETS. A more plausible explanation is that market fundamentals are gradually changing, with all types of market participants increasingly realising that the carbon price is set to rise over the coming years as the EU takes its climate targets increasingly seriously. This expectation is then being priced into prices.

Such shifting market sentiment would be in line with our own analysis. The EC published its proposed ‘Fit for 55’ package in July 2021. This package, which covers a raft of measures required to meet the EU’s climate targets, is now being discussed in national and the European parliaments. Higher carbon prices on the EU ETS, achieved by a tightening cap on EUAs, play a crucial role in meeting these ambitions. Looking at the abatement curve, which reflects the full costs of transitioning to low-carbon technologies across various areas of the economy, we have calculated a carbon price of ~€160 /tCO2 by 2030 (in 2020 prices) is consistent with meeting the EU’s climate targets by then.

This prospect has led to a growing number of investment funds considering EUA as an investment offering an exposure to the green transition, likely attractive financial returns in a low-yield environment given supply-demand dynamics and the opportunity to diversify risks in a multi-asset portfolio.

If you want to find out more about CRU’s abatement curve, how the EU Emissions Trading Scheme functions, what drives demand and supply for EU Allowances, and how the carbon price is expected to evolve over the short to longer term, please get in touch. We will be happy to talk.