The only way is up for carbon prices 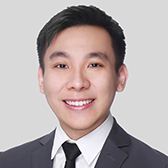 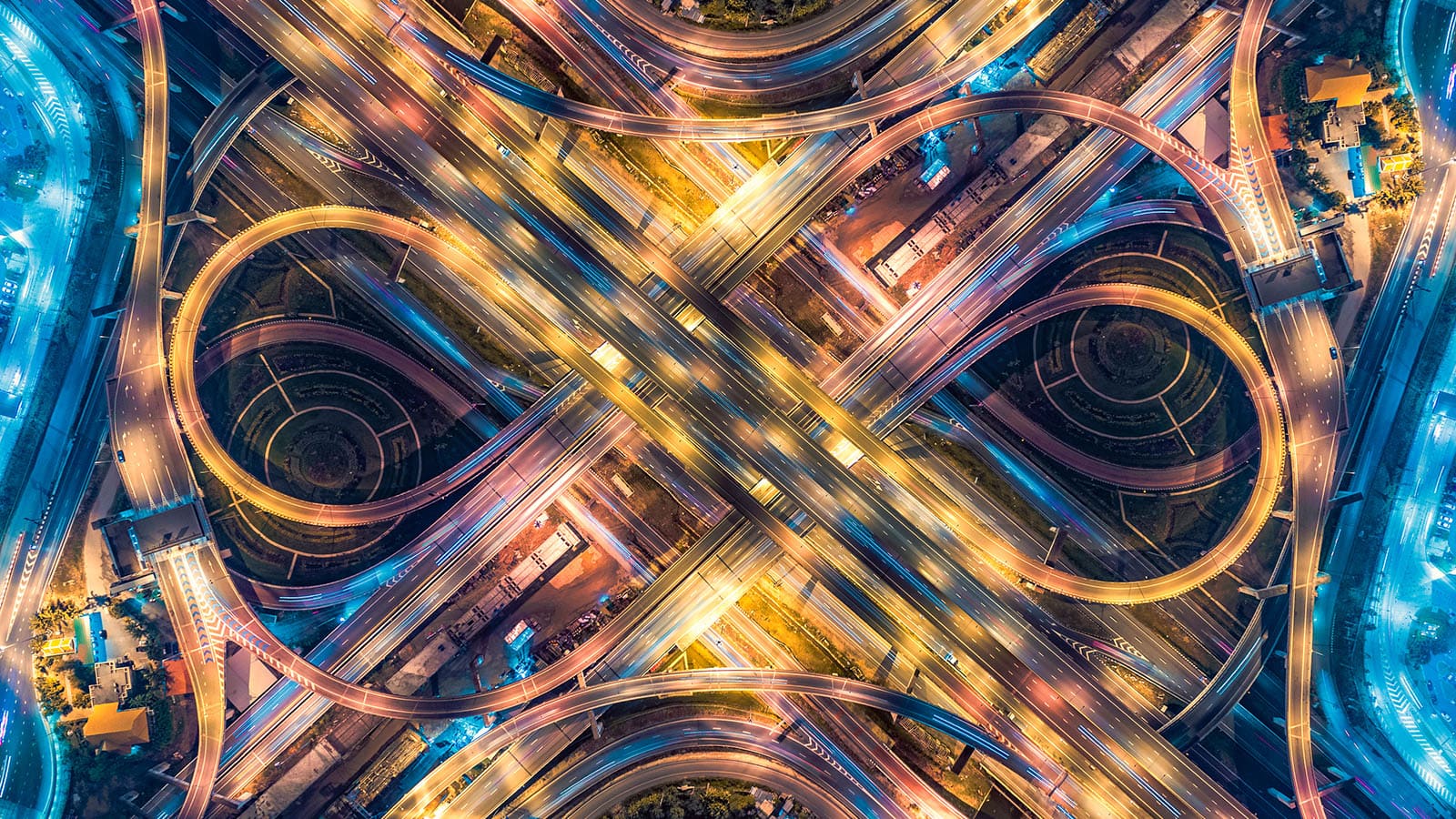 As addressing climate change has become an increasingly urgent political priority, policy makers have been keen to develop the available tool kit to address this challenge. Within that tool kit, carbon pricing plays an important role as it has been identified as one of the most effective ways of reducing greenhouse gas emission levels on the domestic and international level. In some markets, carbon prices have been rising rapidly over the recent past and are forecast to do so for years to come. The commodities markets across the value chain will need to prepare for and adapt to these new prices.

The latest report Climate Change 2021: The Physical Science Basis by the Intergovernmental Panel on Climate Change, published in August, provides the most recent evidence on climate change – every region of the world and the entire climate system are affected. While some changes appear irreversible, the report’s authors argue that strong and sustained reductions in emissions of carbon dioxide (CO2) and other greenhouse gases would limit climate change.

But how to achieve that? For policy makers, the challenge is to address what economists refer to as a ‘market failure’: without government intervention there would be no market for carbon emissions and the true cost of emitting – the pollution created and rising global temperatures with all its consequences – would not be captured in market activity. The result – as we have seen up to now – would be carbon emissions way above of what would be considered optimal.

Many governments around the world have either introduced an Emissions Trading Scheme (ETS) or imposed carbon taxes to address this issue. In the former case, governments set the quantity of emissions permitted and let the market find the market-clearing price, an arrangement often referred to as ‘cap and trade’. In the latter case, governments impose a tax on emissions and then let the market find the market-clearing quantity of emissions. Figure 1 shows the increased popularity of these two approaches over the last two decades. 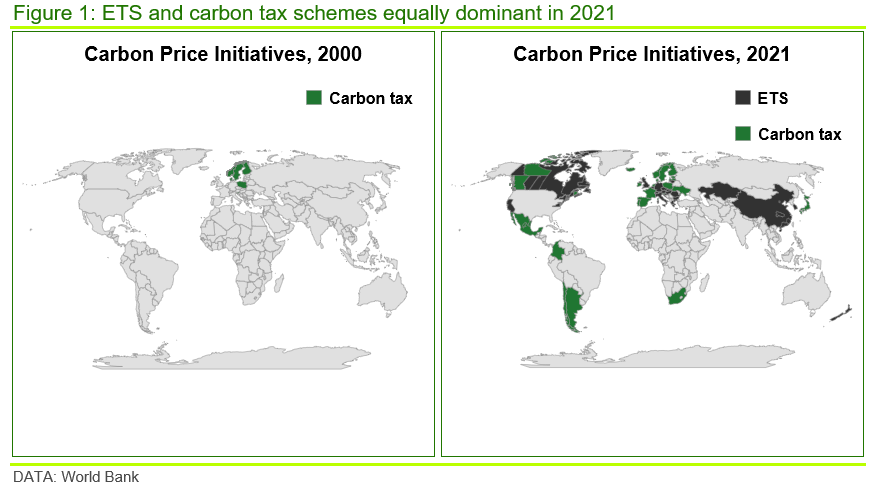 Both approaches are equally popular across the world: in 2021, there were 29 ETSs and 35 instances of carbon taxation that cover both national and subnational jurisdictions. When comparing their respective contributions in addressing greenhouse gas (GHG) emissions, ETS does come out top, covering 16.1% of global GHG emissions, almost three times the 5.5% that carbon taxes cover.

Carbon prices are on the rise, albeit from a low level

As policy makers have raised their climate change ambitions, it is not surprising that they have relied on carbon pricing to do much of the heavy lifting for them.

The EU was first to launch a major ETS in 2005. Initially relatively modest in coverage and generous in offered exemptions, it has, since launch, gone through four increasingly tougher phases, the latest introduced in January this year. By making carbon permits an increasingly scarce ‘good’, the EU is raising the market-clearing carbon price. And these measures appear to be delivering. Having in the past frequently been criticised for being too low to make a difference, the EU ETS carbon price has increased sharply since the beginning of the year, reaching a new record €65 /tCO2 (i.e., $75 /tCO2) on 26 September (Figure 2). 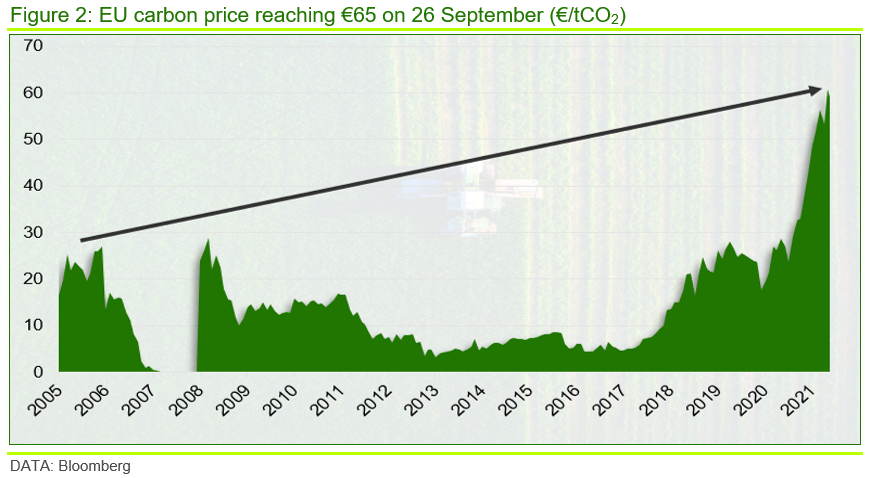 Action is not limited to the European Union: China, the world’s largest carbon emitter, launched its nationwide ETS in July after years of experimentation with regional ETSs – see our recent insight China's new ETS a 'sleeping giant' for more on this. While it is too early to tell, over time, this new ETS could be developed into a powerful tool to curtail carbon emissions in China and, thus, globally. Moreover, there are other exciting developments in Asia as well. A new global carbon exchange, Climate Impact X, will be headquartered in Singapore by end-2021. It offers a marketplace for nature-based carbon credits and an exchange where high-quality carbon credits are traded. Nature-based solutions involve the investment in forestation, conservation and projects that are aimed at absorbing carbon to offset carbon emissions from a companies’ operations.

The road hard travelled: higher carbon prices will be key to reducing carbon emissions but won’t be easy politically

The sharp increase of the carbon price on the EU ETS over recent months gives a flavour of what might be in store in the years and decades ahead. We have conducted a survey of recent carbon price forecasts published by international organisations, governments, think tanks and corporates to get a sense of where carbon prices are headed. As shown in Figure 3, the range of forecasts is huge (n.b. reflecting different forecasting methodologies and different assumptions) but we should not be surprised to see a global carbon price of around $100 /tCO2 by 2030 and around $300 /tCO2 by 2050 if the world gets serious about climate change mitigation. 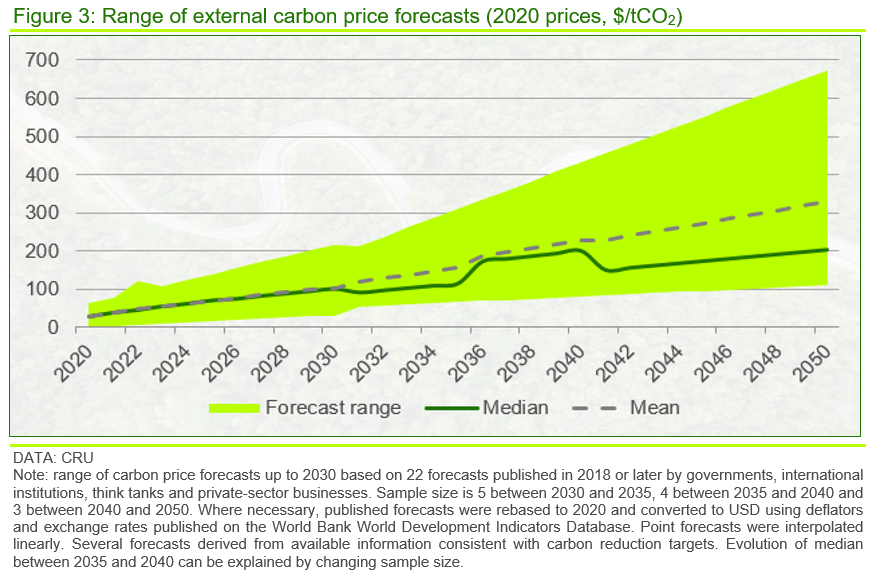 For policy makers there is a bumpy road ahead. Even small increases in energy or fuel costs frequently lead to protests or even social unrest. How to sell the necessity of increasing the price of energy to the electorate in the name of climate change mitigation when increasing prices are deeply unpopular and – often – also considered to be socially unfair? The latest spike in European natural gas prices is a reminder of that. Finding a way through this conundrum will be one of the biggest challenges for policymakers in the years ahead. As the recent outcome of the Swiss referendum on tougher climate change legislation forcefully demonstrates, we should be ready for major setbacks on the way to net zero over coming years.

Major setbacks are not the same as abandoning the ambition and the commodities markets – just like all other sectors of the global economy – will need to prepare for and adapt to higher carbon prices.

The likely dramatic increase in carbon prices in the future will have fundamental implications for many parts of the economy, more so for businesses in the carbon-intensive industries. However, not all players will be affected equally. For those industries where switching electricity to a low-carbon alternative is a solution (e.g., mine sites, aluminium production), the transition could be ‘relatively’ simple and at lower cost. By contrast, changing the way how a key raw material is produced (e.g., hydrogen for ammonia) will likely prove more challenging and, almost certainly, more costly. Where a wholesale shift in technology is needed (e.g., hydrogen steel production), the transition will potentially be painful. Even operations that are already low carbon as a result of access to low-carbon electricity (e.g., hydro feeding aluminium smelters) will see cost inflation as supply contracts are renegotiated in the context of rapidly rising electricity prices.

Businesses are increasingly preparing for this, with a rising number developing extensive decarbonisation plans as we embrace a carbon-neutral world. Common industrial practices include the electrification of energy inputs, integrating renewables and improving energy efficiency in production process to reduce the carbon footprint. Implementing these decarbonisation plans often incurs substantial upfront investment cost, which can act as a barrier to transformation. Up to now this made the alternative route of action – doing nothing – attractive to many. But as the opportunity cost of doing nothing increases as carbon prices go up, this alternative route will become increasingly unattractive. Those who have already placed their bets on hefty investments to decarbonise their production operations are starting to reap the benefits as the cost of carbon continues its way up. We should expect others to follow suit.

CRU is committed in providing a comprehensive view on carbon prices as the industry continues to embrace a carbon neutral world. We are currently in the final phases of developing a new carbon pricing model that aims to provide greater insights into carbon prices that extends into 2050.