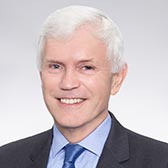 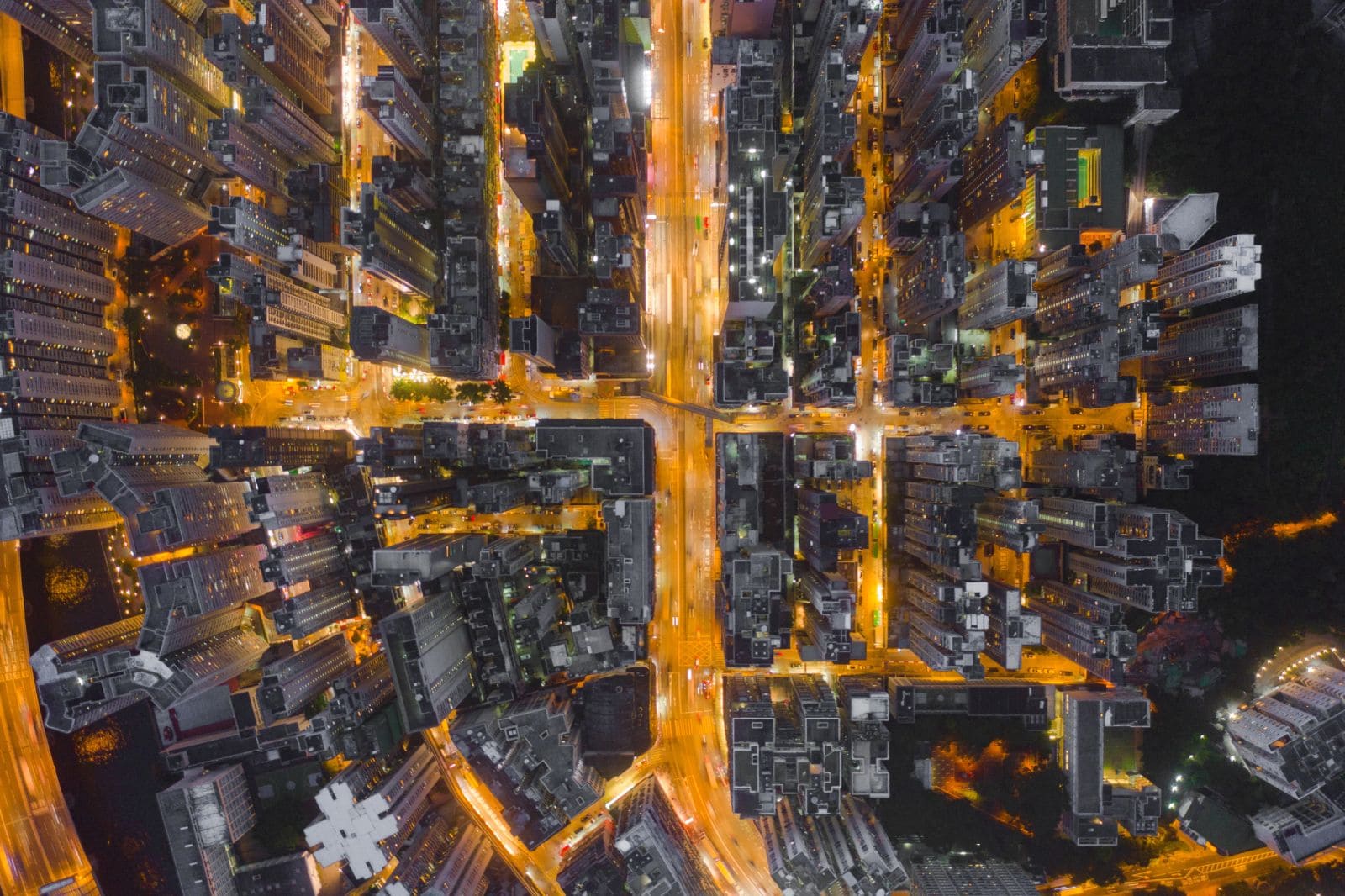 In this Insight we examine China’s new Emission Trading Scheme (ETS). We look at progress so far and consider its future potential. We do this by making comparisons with Europe’s ETS and consider the CO2 price necessary to impact investment decisions in China’s power and steel industries to bring about significant carbon reductions over the long run. Ultimately, China’s ETS is likely to be extremely influential, having the potential to become one of the biggest drivers of carbon reduction globally.

China’s national market for carbon trading was launched on 16 July 2021. This scheme (also frequently referred to as an emission trading system) is considered one of China’s key policies towards fulfilling its commitments towards decarbonisation, reaching peak carbon by 2030 and net-zero carbon by 2060.

This market-based mechanism should help drive lower carbon activities by rewarding carbon reduction and penalising those failing to act – as opposed to regulations and administrative targets, which have been China’s favoured approaches so far. This ‘cap and trade’ scheme should provide predictability over the amount of emission reductions that will occur, through setting a ceiling on CO2 allowances, but offers little certainty – unlike a carbon tax – over the price of CO2 and the costs industry may face.

China’s new ETS started under the management of the Shanghai Environmental and Energy Exchange. This followed eight regional pilot exchanges run since 2013 across various industries.

China’s new nationwide ETS initially covers the power industry only. Electricity generation is the largest carbon emitting industry and is responsible for ~40% of China’s CO2 emissions. The scheme includes 2,225 companies involved in power generation, responsible for ~4.5 bn t of CO2 annually. Even at this early stage, given China’s contribution to global emissions, it is the largest emission trading scheme in the world, representing ~10% of global CO2 emissions.

The national scheme will eventually be widened to include participation from regional ETS pilots and other industries, including steel, cement, petrochemicals, chemicals, base metals, paper & pulp and aviation. Collection, analysis and verification of emissions in these other industries is more challenging so it will take more time to follow the power industry. Nonetheless, many of these industries, including steel, will almost certainly be included within the current Five-Year Plan, before 2025. When fully implemented, China’s ETS will cover about 7,500 companies, accounting for nearly three quarters of CO2 emissions in China and almost 20% of all global CO2 emissions. 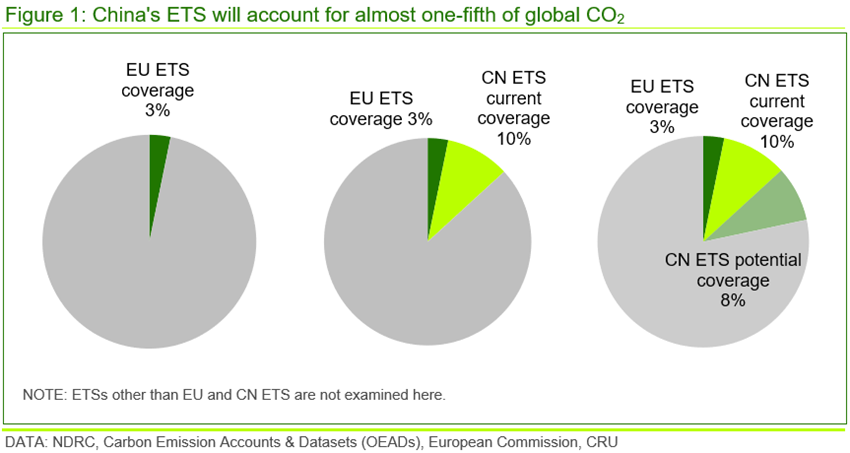 On the first day of trading 4.1 Mt of carbon allowances were traded, which is equivalent to ~33% of total annual carbon emissions in China’s power industry. Total turnover was RMB210 M (i.e. $32 M), giving an average price of RMB50 /tCO2 (i.e. $8 /tCO2), which was above the average price of ~RMB40 /tCO2 (i.e. $6 /tCO2) of the regional pilot schemes over the past two years. Since then, daily trading volumes have fallen and prices have dropped below RMB50 /tCO2 (i.e. $8 /tCO2), a fraction of the current price on the EU ETS (Figure 2). 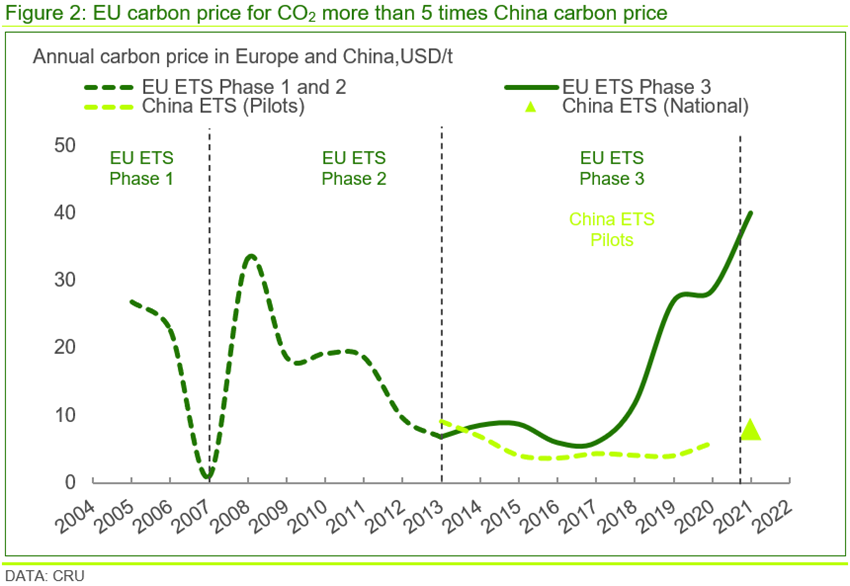 We shouldn’t read too much into this though as it’s still early days for the new nationwide ETS – for example, it took nearly a decade for the EU ETS to develop fully, with the initial phases focused on creating a trading scheme and building credible emissions disclosure and verification systems.

That said, it is likely that the government does not want this scheme to have an excessive impact on business operations in the short term. Price stability is preferred, with a predictable path helping power producers, and other industries, to factor carbon prices into future investment decisions.

Regional ETS pilots continue to exist but will eventually be absorbed into the national ETS scheme. Do they serve as a good guide to the national ETS? Given the low CO2 prices in the regional ETS pilots (e.g. average of RMB40 /tCO2 or $6 /tCO2), it has been questioned how effective they have been in driving down carbon emissions. Reductions in coal-based generation and consumption have been achieved in the power sector where regional ETS pilots have been operating, but these reductions are more likely to have been driven by government command than financial incentives since the effects of the carbon price on marginal costs are small relative to electricity prices. 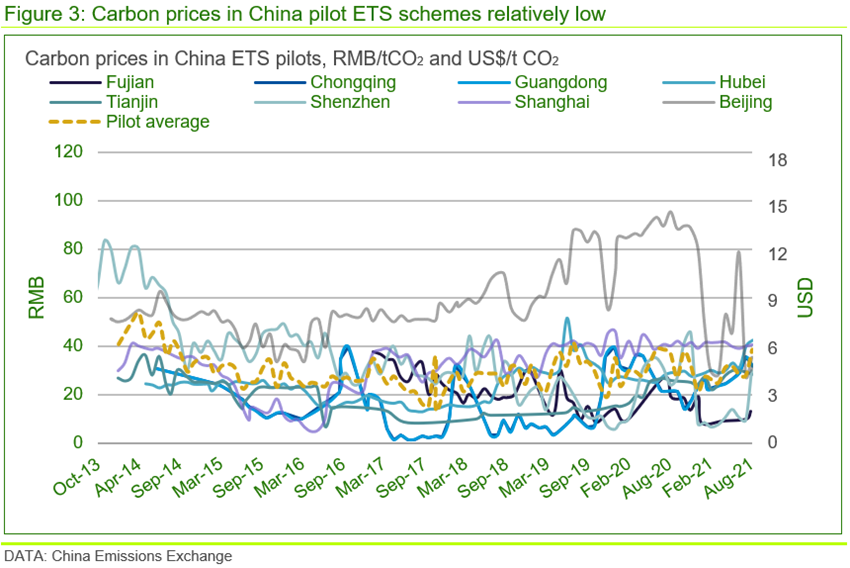 The EU ETS is possibly a better guide regarding the likely evolution of China’s ETS than domestic regional pilots. Geographically, the EU ETS is continent-wide and involves significant volumes of CO2. The EU scheme began in 2005 and has gone through various implementation phases.

Current indications suggest that China may follow a similar route to the EU. In China, the scheme has begun with a relatively generous allocation of free CO2 emission permits. These are based on a carbon intensity benchmark, although the use of carbon intensity rather than absolute emissions might be considered a potential weakness. In the future, allowances will need to set absolute levels to drive more meaningful CO2 reductions. 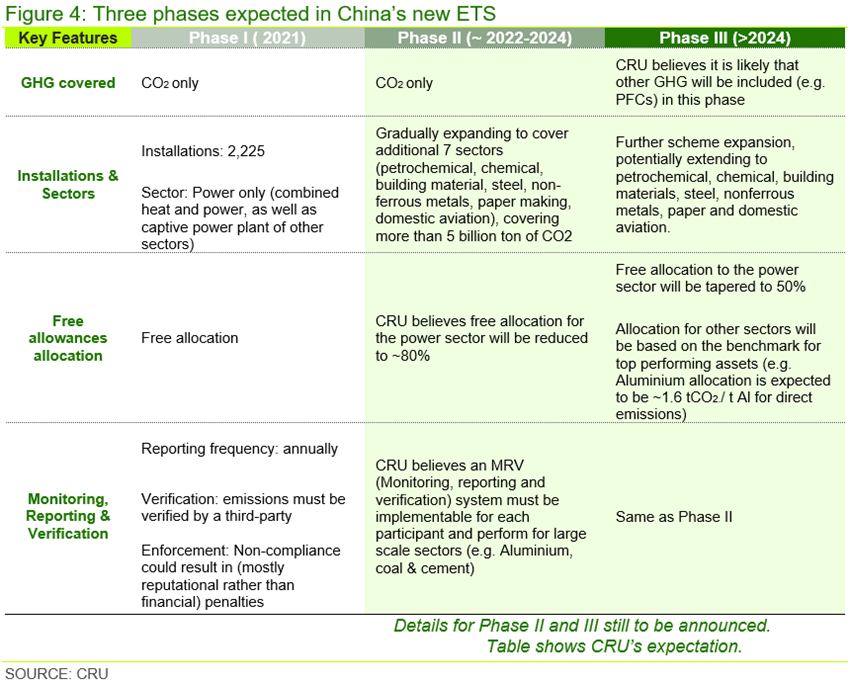 From 2022 onwards free allowances are likely to be reduced and tighter emission benchmarks introduced. These allocations are likely to be tapered over time, with benchmarks based on the top performing assets. There will also be more fine tuning, including bigger penalties for non-compliance. Absolute caps may be introduced from 2025 followed by further reductions in permit allocations, all of which will gradually raise CO2 prices over time. China’s ETS will include participation from other companies and other industries that are not allowed to enter currently. The financial sector will likely be allowed to trade at some stage. Other greenhouse gases are also likely to be included.

Ultimately, the costs and benefits of an ETS depend on the market price for CO2. This price is closely related to policy decisions over ETS regulations such as initial allowance pricing, the carbon cap, preventing leakage and industry coverage.

Opinions are divided over future CO2 prices. A China Carbon Pricing Survey conducted by China Carbon Forum in 2020 – 2020-CCPS-EN.pdf (chinacarbon.info) – suggested that average CO2 prices would rise towards RMB93 /tCO2 (i.e. $14 /tCO2) by 2030 and RMB167 /tCO2 (i.e. $26 /tCO2) by 2050. CRU research suggests that these carbon prices would be insufficient to make any real impact on decarbonisation. Put differently, if carbon allowances are reduced to make any tangible impact on decarbonisation levels, the CO2 price would increase significantly as a result.

CO2 prices in the EU ETS are currently much higher than in China. However, China’s CO2 prices will likely move towards the EU CO2 price as the above-mentioned regulations are rolled out. Given that these two blocs account for a significant proportion of global CO2 emissions, prices ideally should equalise between the two to prevent carbon leakage, notwithstanding general price differences between the EU and China. The proposed introduction of a Carbon Border Adjustment Mechanism (CBAM) by the EU from 2023, with full adoption by 2026, may also hasten this.

Full implementation of these phases will take some time. China’s ETS is approximately eight years behind the EU but, given the aggressive decarbonisation policies expected in China over the current Five-Year Plan, it may take less than five years for full implementation to come about.

Low CO2 prices will not reduce emissions or reliance on fossil fuels or promote clean energy. Therefore, the CO2 price needed to impact investment decisions for China to hit its decarbonisation goals needs to be considered. The answer to this is very complex since there is not just one price, but a series of prices for CO2 that will have an impact on different industries’ costs to incentivise investments to reduce carbon. For example, in the EU, CRU estimates in the power industry CO2 prices will likely have to rise to the equivalent of ~RMB 650–780 /tCO2 (i.e. $100–120 /tCO2) to encourage solar to replace coal- or gas-fired power, including the cost of battery storage technology to cover base-load generation.

For the EU steel industry, we estimate that CO2 prices may have to rise to at least the equivalent of RMB2,000 /tCO2 (i.e. $300 /tCO2) to encourage a switch to hydrogen technologies. Electricity and steel prices will likely have to rise. There is a hierarchy of abatement measures in various industries associated with different CO2 prices from easier options using current technologies (e.g. renewable power) to more difficult options involving new technologies (e.g. hydrogen use for steel production). It is also important to note that China is likely to be able to build carbon abatement technologies more cheaply than in the West, so lower CO2 prices might apply in China compared to in the West.

To reduce more carbon, higher CO2 prices are required. At RMB50 /tCO2, China’s current CO2 price, or the EU CO2 price of RMB400 /tCO2 equivalent, are not high enough to bring about required changes over the long run. A range between RMB650–2,000 /tCO2 (i.e. $100–300 /tCO2) is a more sensible long-term CO2 price if decarbonisation targets are to be met using a market-based price mechanism.

Industry needs to plan for higher CO2 prices by mid-decade

In conclusion, China’s nationwide ETS is not expected to have any immediate impact on existing investments and commodity price levels compared with the various administrative targets that are currently favoured in China. The current low price is partly by design and low compared with EU ETS. But with the Chinese government committed to fulfilling its carbon pledges, the new ETS is set to become a significant tool in reducing global emissions over time.

We expect the first material changes to the new scheme around mid-decade, when China’s ETS has the potential to become one of the most significant drivers of carbon change globally. These changes will raise CO2 prices, which will have an increasingly important impact on costs, investment, price and demand decisions across many industries. Ultimately, to be effective, we expect the Chinese CO2 price will need to rise significantly from today’s RMB50 /tCO2 (i.e. $8 /tCO2) towards RMB650–2,000 /tCO2 (i.e. $100–300 /tCO2) within the next decade.