Indian solar is not cheap – it is simply subsidised 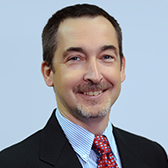 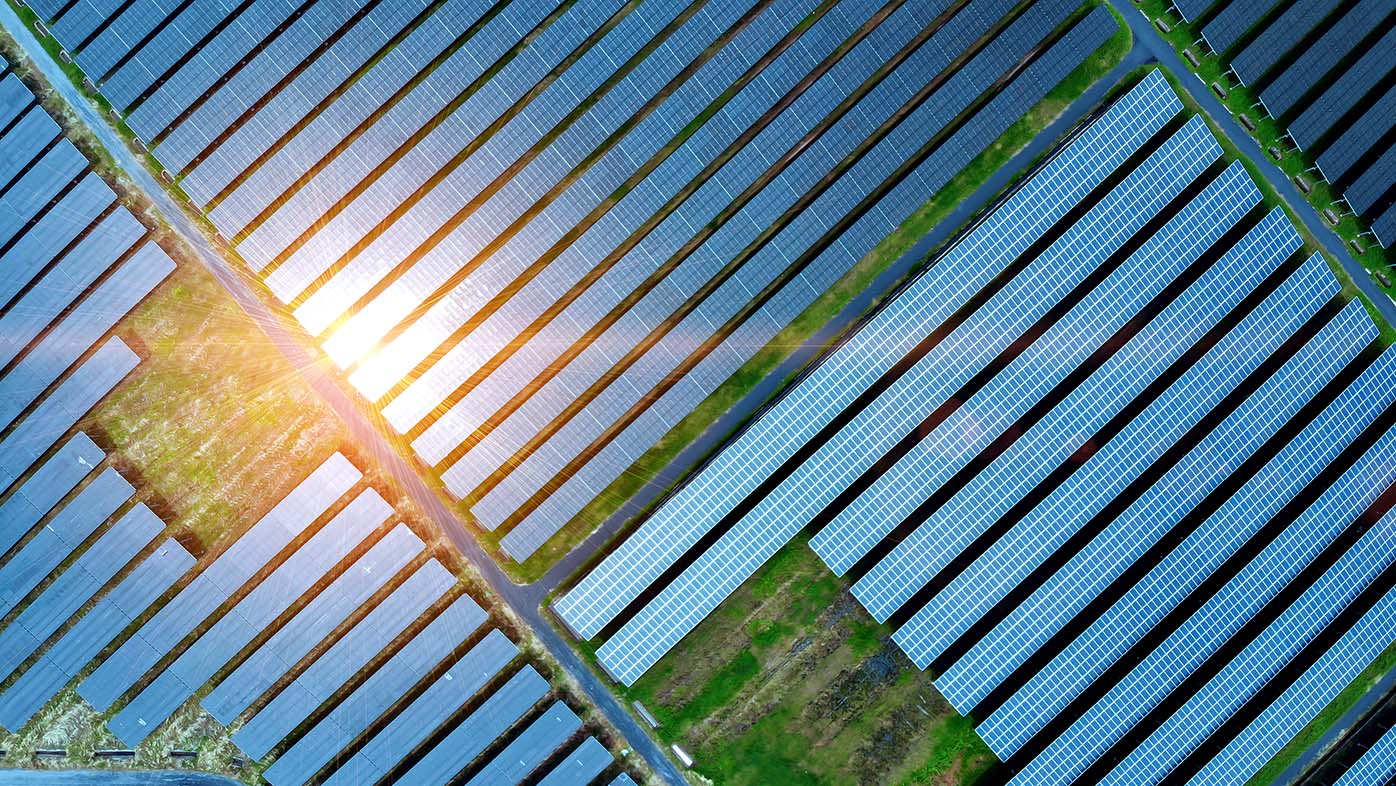 Recent, competitively bid solar power tariffs in India – as low as $27 /MWh – are increasingly referenced as an indicator that solar costs have fallen massively. However, basic research of the projects involved shows the upfront development costs of these power tariffs are subsidised. Taking account of the subsidy shows true costs are closer to ~$69 /MWh, broadly in line with unsubsidised costs of solar elsewhere.

Additionally, low load factors of solar installations in India overall suggest that not all are able to take full advantage of the high solar irradiation rates across the country. We believe this is because, in many cases, solar parks have been built with low cost in mind. For both reasons, we urge that Indian solar is not used as a reference architype for the future of solar installations globally.

More generally, until it is accepted that renewables will ultimately lead to higher energy costs there cannot be a proper debate about the real choices of decarbonisation. Without this fuller debate, decarbonisation of the economy will be hampered in our view.

The myth of low-cost renewable energy

CRU attended COP26 and, in its main and various side events – from Janet Yellen and Nicholas Stern to UK government officials and associations working in the decarbonisation arena – we heard multiple references made to the low cost of renewable power. In many cases, specific reference was also made to the particularly low cost of renewables in India to drive home this message. But analysis of real-world renewables costs does not bear these comments out and we argue that, until the realities of this are accepted, there can never be a proper debate between politicians and society about the real choices of decarbonisation. Without this fuller debate, decarbonisation of the economy will be hampered.

While we don’t agree that renewables are ‘low cost’ (i.e. relative to fossil power), it is definitely our view that renewables provide the lowest-cost option for significant decarbonisation of the economy. The technology is proven and commercialised and the power sector could transition at a much lower cost than other sectors, as CRU’s Carbon Abatement Curve shows. But don’t be fooled, while the costs of renewables have fallen, base load renewable power remains more expensive than fossil-based power and decarbonisation of power grids will lead to higher energy prices, unless subsidised.

In this Insight, we specifically explore the cost of solar in India that has become a ‘touchstone’ for debate and opinion in this area and is used – mistakenly in our view – as an indicator for how low solar costs are heading.

What everyone is saying about Indian solar costs is wrong

When Indian solar costs are referenced, it is typically in relation to very low power tariffs achieved through auction. Our research suggests that tariffs agreed at two solar parks are the most likely source of quoted low costs: Bhadla solar park in Rajasthan and Dholera solar park in Gujarat.

These two solar parks have produced auctioned power tariffs through a competitive bidding process of between INR1.99–2.62 /kWh in recent years, with the lowest tariff of INR1.99 /kWh associated with the Dholera solar park and agreed December 2020. These tariffs equate to ~$27–40 /MWh, but “$25 /MWh” is often optimistically given as “the cost of solar power in India today”.

And it is true, these tariffs look very low. But let’s look at the basis of these tariffs and what they tell us about the cost of solar power in India

To promote electricity from renewable sources, in 2003, the Indian government introduced the Renewable Purchase Obligations (RPO) policy. This mandated large companies [with open access to electricity markets], companies with captive power and power distribution companies – termed ‘obligated entities’ – purchase a given level of renewable power, now set at 21% for 2022. Responsibility for meeting the target initially rested at state level. The obligation can be met in two ways, either by purchasing Renewable Energy Certificates (RECs) that are issued by certified renewable energy projects nationally or by setting up renewable installations, either in-state or out-of-state. Current prices of RECs are ~$30 /MWh for solar-sourced RECs.

So, both Rajasthan and Gujarat, amongst all states, have had a responsibility for the achievement of the RPO and, in our view, the development of the Bhadla and Dholera solar parks is a direct response to this requirement.

Further, the Electricity Amendment Bill 2021 introduces specific provisions for penalties for not meeting the RPO (i.e. up to INR1 crore fines) and shifts responsibility from state to the central government in line with the national climate change goals. We believe this amendment, when passed, will provide more incentive for state governments to develop renewable power sources.

Basic background research shows that Bhadla solar park in Rajasthan has been developed by various JV companies of the Government of Rajasthan and the project also received financial assistance from the central government. For example, Bhadla III was developed by the Saurya Urja Company of Rajasthan Ltd. – a JV company of Government of Rajasthan and IEDCL that specialises in infrastructure development for renewable energy projects – that was set up to build the infrastructure for the solar park including: 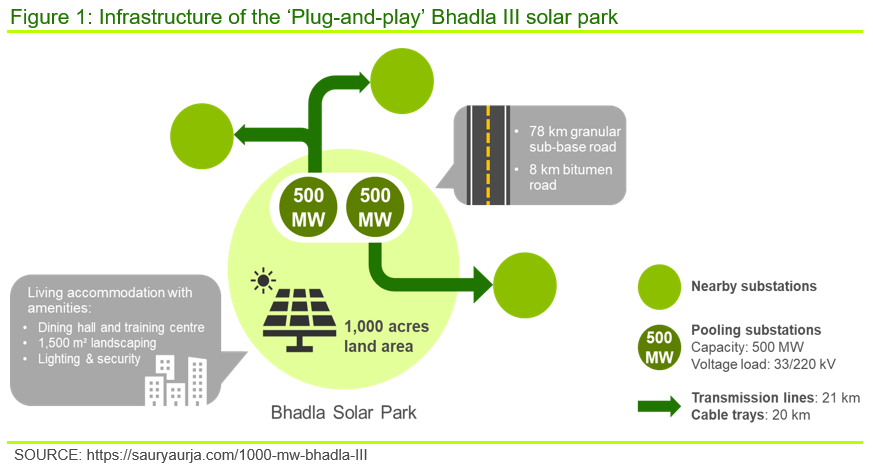 Bhadla solar park is described as sitting in dry and barren wasteland in an expanse of desert that is sparsely populated and prone to sandstorms. As such, it is far from demand centres and so construction of new transmission lines to connect to the national grid was necessary. These were developed by Powergrid Corporation of India (PGCIL) and state-owned transmission company TRANSCO and were financed under the Rajasthan Renewable Energy Transmission Investment Programme (RRETIP).

It is also telling that, in a country that has access to a large pool of low-cost, unskilled labour, the solar park developers have chosen to use robots for panel cleaning. This gives an indication of both the harshness of the environment and remoteness of the location where this park is situated that will certainly have negatively impacted on upfront build costs and will impact negatively on ongoing operating costs.

The solar park is described by the owners themselves as a “plug-and-play” facility, whereby solar developers need only install the solar panels and inverters to start delivering electricity. This electricity is then fed into the state grid.

The Dholera solar park in Gujarat is similarly structured. Much of the infrastructure for the park has been provided and developed by Gujarat Power Corporation Ltd. (GPCL) including:

Reports suggest that investment in the infrastructure at Dholera equates to ~$0.65 M/MW, but it appears that project developers only have to pay a nominal upfront development charge, as well as ongoing operational and maintenance charges for this infrastructure. It is also stated that “fewer charges are applied than in Rajasthan”, which is why a slightly lower power tariff was possible.

Thus, for both Bhadla and Dholera solar parks – the parks for which the lowest power tariffs are reported – much of the upfront investment costs appear to be borne by state and central governments. As such, the power tariffs agreed only need reflect the costs of the solar panels and inverter installations themselves, as well as ongoing operating and maintenance costs. Various reports suggest that panels [and inverters] may make up between ~30–40% of total upfront costs of a grid-scale solar installation, which implies total upfront costs of ~$0.9–1.1 M/MW overall. This level of investment is absolutely in line with that expected for a grid-scale solar park using good quality panels, so India does not appear to be particularly cheaper than anywhere else in this regard.

Unsurprisingly, the subsidised cost of electricity is low

Applying CRU’s standardised approach for calculating the levelised cost of electricity (LCOE), we can estimate the impact of subsidised infrastructure on the price that a developer would be willing to sell power in the Indian context.

Thus, assuming typical solar build costs, subsidised at ~$0.65 M/MW, implies a ‘subsidised levelised cost of electricity’ (SLCOE) of ~$26 /MWh. This subsidised cost is at the bottom end of the range of the solar power tariffs agreed in recent years at these sites and is plausible given the level of subsidy. However, if we remove the subsidy, the true cost of this solar power rises to ~$69 /MWh, which is within the range of solar costs elsewhere. 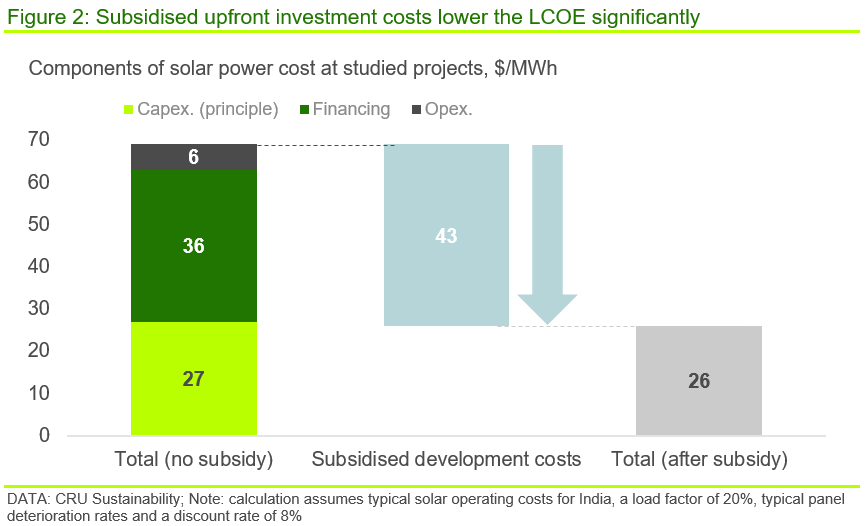 Additionally, this cost is for electricity delivered into the grid and does not take account of further costs associated with grid balancing, whether this is via storage, variable fossil plant operation or some form of demand management, all of which implies further cost. Our calculations suggest additional costs for storage could lift the base load power equivalent cost to ~$122 /MWh even after taking into account falling battery costs.

It appears that, in the cases above, the Rajasthani and Gujarati state governments have decided that, to meet their RPO, the preference is to subsidise renewables within state boundaries, rather than buy RECs from renewables providers located elsewhere. This seems a rational decision that encourages job creation, economic development and, in the case of Rajasthan, the use of marginal land within the state, while meeting Federal requirements.

A further consideration here relates to the build quality of Indian solar parks. Insolation – or the level of solar irradiation – in India is high, therefore, we would expect solar installations to exhibit relatively high load factors of well above 20%. However, analysis of official solar capacity and generation data for India suggests that load factors are, on average, at ~15%.

This implies that existing solar parks are not fully able to exploit the solar resource available. This may be due to maintenance issues (e.g. located in difficult environments), cleaning issues (e.g. dust on panels), inverter configurations or the use of lower quality panels and inverters – chosen for cost reasons – leading to high rates of non-generation time, etc. This is supported by anecdotal evidence we have of the low-quality of installations in some cases.

It could also be that high levels of curtailment apply given the need to integrate predictable, but highly variable, solar into the grid. Finally, high ambient temperatures reduce the efficiency of solar panels by about 0.5%/°C, so lower-cost installations located in dusty, desert environments would be particularly prone to output reduction.

Thus, while the specific reasons for low load factors are unknown at this stage, we believe that solar installations in India have yet to prove their robustness and longevity. Coupled with the analysis higher up that shows subsidisation of development costs plays a key role in low reported power tariffs, at this stage, we strongly recommend that Indian solar is not used as reference architype for the future of solar installations globally.

If you want to discuss our views on the cost of the energy transition, as well as the specific impact on the cost of energy and implications for commodity markets, please get in touch. We will be happy to talk.