Climate change: it is (nearly) all about money

The risk from climate change is the latest risk the capital markets need to manage. Recent efforts to increase the transparency on who is exposed financially to these risks has been a step change, with banks, insurers and asset managers among others increasingly taking into account climate-change considerations in their business decisions. As a result, corporates that do not take climate change seriously can expect higher funding costs or, worse, might not be able to secure external funding for their projects at all.

Climate risk: the new kid on the block

The Global Financial Crisis (GFC) just over a decade ago illustrated powerfully how closely the real economy and capital markets are interconnected. Since then, policymakers have been determined to ensure the stability of the financial system to avoid another economic crisis. While the initial focus was on debt – a key factor behind the GFC – more recently regulators have become increasingly concerned about the potential consequences of climate change for the capital markets.

What could the increasing number of extreme weather events such as flooding, hurricanes or wildfires mean for insurers? What could the transition from fossil fuels to renewable energy mean for investors? Could investments in fossil fuel end up as stranded assets, which would have to be written off? What could happen to investments in regions of the world that are likely to be affected dramatically by climate change (see Figure 1)? Regulators such as central banks are increasingly stress-testing financial institutions along these lines to identify any emerging financial stability risks.

Answering these and similar questions requires a good understanding of who is exposed to these risks. In 2015, the Financial Stability Board (set up by national regulators after the GFC to coordinate regulatory efforts globally) established the Taskforce on Climate-Related Financial Disclosures (TCFD) to shed light on this, through the introduction of mandatory data collection and reporting requirements. The TCFD could turn out to be a game changer. The TCFD’s recommendations on governance, strategy, risk management, metrics and targets, published in 2017, are already having a profound effect on how the capital markets engage with the issue of climate change and are leading to fundamental changes in the industry. In June, the G7 endorsed that the TCFD’s recommendations should be made mandatory.

For the capital markets, climate change is just another risk to manage

A better understanding of who is exposed to climate-change risks has allowed investors and creditors to reassess their existing portfolios, loan books, modify their investment and loan criteria going forward. Beyond climate change, there is a broader trend towards more impactful investment captured by the principles of ESG investing (i.e., environment, social, governance), with the result that corporates that do not meet these principles are increasingly excluded from the universe of acceptable investment opportunities. While still relatively small, ESG investing has been one of the fastest growing markets in recent years and is only set to grow further. This trend also reflects wider societal changes, with the UN Sustainable Development Goals (SDGs) increasingly being used to provide guidance on investment.

Away from the lofty ambitions of contributing to meeting the UN’s SDGs, worrying about climate change is ultimately about financial returns, with banks and other institutional investors focused on maximising the risk-adjusted return on their investment – and there is the additional reputational risk that your own business might appear to be seen on the ‘wrong side of history’. From that perspective, climate change is merely a new risk that needs to be considered and managed when appraising investment opportunities or loans (Figure 2). 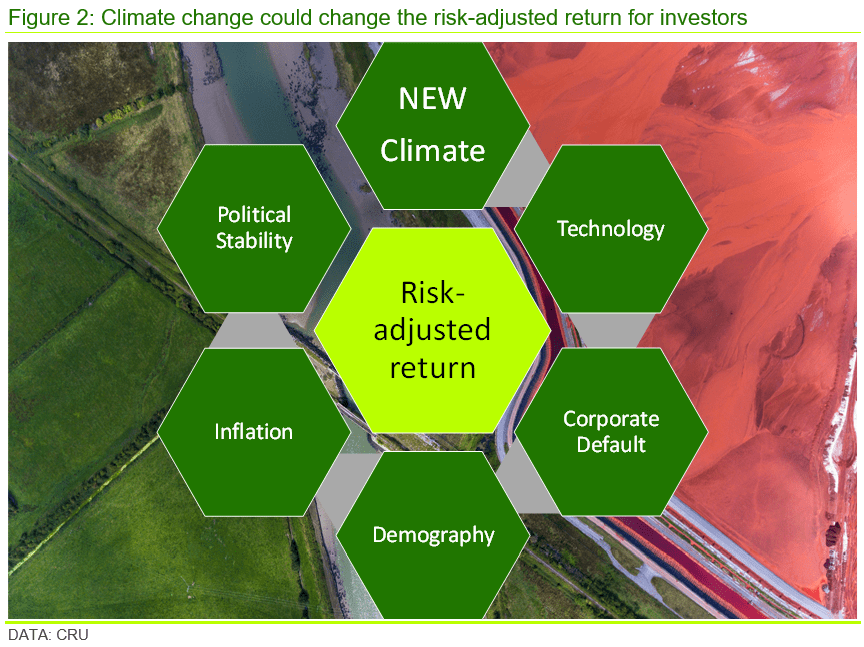 COP26 and the Glasgow Financial Alliance for Net Zero

The sheer size of the capital markets and their crucial role in financing the real economy mean that they are playing an increasingly important role in facilitating the transition to a low carbon economy. Between 2015 and 2020 alone, green bond issuance increased six-fold. Some predict annual issuance will rise to $1 trn in 2022 (see Figure 3). 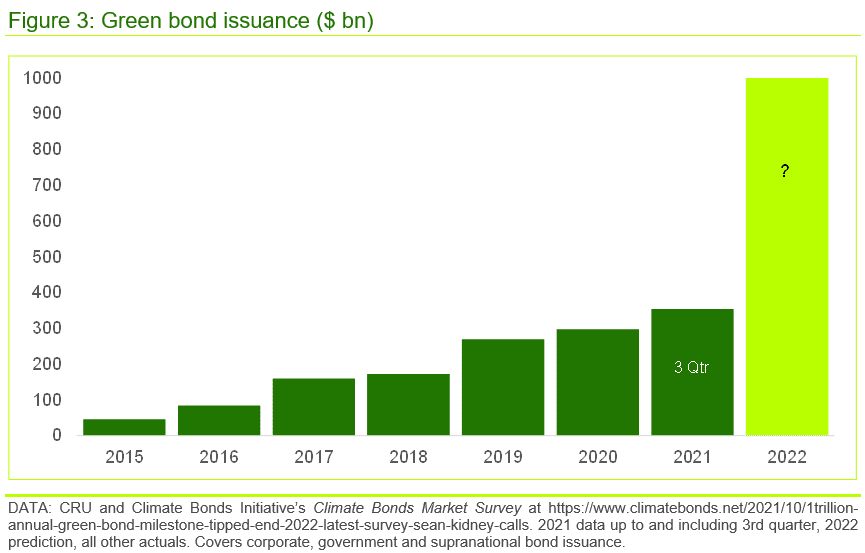 This is increasingly recognised by policymakers too. It is thus not surprising that the capital markets are playing a prominent role at the Conference of the Parties (COP26), which is held in Glasgow at the end of October and early November. COP is the main decision-making body of the United Nations’ Framework Convention on Climate Change, with many observers seeing COP26 as an important follow-up from the historic Paris Agreement in 2015 (n.b. for further information on COP26, see our previous Insight here).

The Glasgow Financial Alliance for Net Zero (GFANZ), chaired by Mark Carney, former Governor of the Bank of England and currently UN Special Envoy on Climate Action and Finance, is the capital markets’ contribution to COP26. GFANZ brings together some of the leading financial institutions in the world covering all aspects of the capital markets from asset management and insurance to service providers such as stock exchanges and rating agencies. This new alliance, which is committed to accelerate the decarbonisation of the economy, can be seen as a step change in the capital markets’ response to the challenge of climate change, and could make “green investment” mainstream soon. Or to put it in the words of Mark Carney: every financial decision ought to be a climate decision.

Why does that matter to the commodity industries? The cost of financing is particularly important for capital-intensive industries that rely on external funding to finance major investment projects, often running into the hundreds of millions or even billions. It is also worth noting that projects in the commodities sector span a number of decades.

These industries, including commodity producers, thus need to adapt not only to the changing political and regulatory landscape, but also to the rapidly evolving demands and expectations of the capital markets. With an increasing number of asset managers making investment decisions based on their net zero commitments – and thus increasingly reluctant to get involved with carbon emitters – commodity producers will need to act. The fact that credit rating agencies and index producers have joined the GFANZ should provide an additional motivation, with the former bound to scrutinise more thoroughly the environmental credentials of corporates in their assessments of credit worthiness, while the latter are set to develop ever more sophisticated indices based on climate criteria. With indices playing an important role in active and passive portfolio allocations, being excluded from an index can have significant financial implications, including declining shareholder value.

A failure to act could in the best case merely lead to higher financing cost – to meet a given risk-adjusted return – and in the worst case, to an inability to access external financing at all. This would be the case if the capital markets deemed the risks involved to be unacceptably high. Whatever the outcome of the political negotiations and commitments at COP26, the capital markets on their own will increasingly drive the transition to a low carbon economy – money talks.