Carbon pricing schemes - only for the rich? 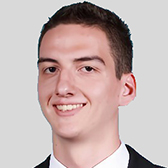 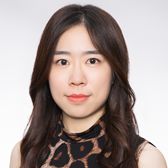 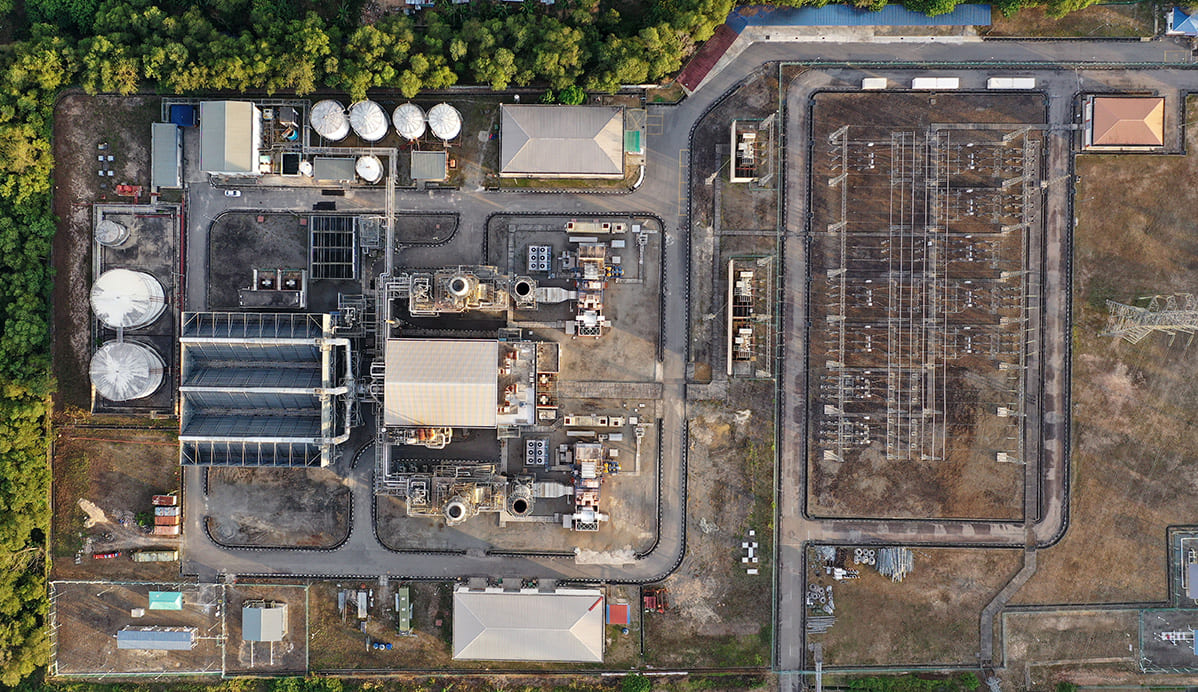 In this Insight, CRU Sustainability looks at carbon pricing schemes around the world. These schemes, which can be either in the form of carbon taxes or emission trading, are generally regarded as one of the most effective ways to mitigate climate change as they put an explicit price on carbon emissions. We find that carbon pricing schemes can mainly be found in high-income countries, and far less often in middle- and low-income countries. Greater prevalence in high-income countries reflects current policy priorities – but the interest in middle-income countries is rising. We also find substantial differences across countries and regions in terms of carbon prices, economic activities covered, and exemptions offered. As a result, the effective carbon price that particular businesses face in a country, might be very different from the headline figure. This makes it very difficult for businesses in the commodity markets to understand the cost implications of these schemes across their supply chains. Detail really matters. We expect more of these schemes to be launched in middle-income countries over the coming years but prices to remain much lower than in high-income countries.

With policy makers keen to meet their climate ambitions set out in their nationally defined contributions, there is an increasing interest in carbon pricing schemes. Unlike most other climate change mitigation policies, these schemes are market based, using price signals to influence the behaviours of market participants and ultimately market outcomes. Carbon pricing schemes achieve this by establishing an explicit price for carbon emissions.

Carbon pricing schemes are either in the form of carbon taxes or emission trading schemes (ETS). In the case of carbon taxes, policymakers impose an explicit tax (i.e., a price) on carbon emissions and then let emitters decide how much carbon they want to emit (i.e., the volume). These taxes are similar to implicit taxes on pollution, such as excise fuel tax, but focus more on changing behaviours rather than generating more revenue for the government. In the case of emission trading schemes, policymakers limit the permissible amount of carbon emissions over a certain period in the jurisdiction (i.e., the supply of available carbon emissions, often expressed in terms of available allowances) and then let the market find the price that matches demand and supply. This is also known as “cap and trade”.

Both approaches have their advantages and disadvantages. For example, introducing a carbon tax is arguably easier than establishing an ETS, which requires a dedicated trading platform. Moreover, carbon taxes give rise to a stable carbon price unlike trading schemes, which can suffer from price volatility, potentially requiring market interventions. In the ETS’s favour is the fact that it allows policymakers to determine the quantity of permissible carbon emissions directly, thereby offering a more direct tool to reduce carbon emissions.

CRU Sustainability reviewed nearly 200 countries, 53 of which are classified by the United Nations as high income; slightly more than 100 as middle income, and 26 as low income. Around a dozen countries have not been classified in terms of income status. 40 high-income countries (n.b. nearly two thirds) and 20 middle-income countries (n.b. nearly a fifth) have some form of carbon pricing scheme, which cannot be said for any of the low-income and unclassified countries.

Out of the 40 high-income countries with a carbon pricing scheme, four have a carbon tax only, 18 have an ETS only, while nearly half of them have a combination of both schemes. Out of the 18 high-income countries with an ETS only, 11 had no domestic scheme but participated in the European Union’s ETS (EU ETS) – one of the few cross-border carbon pricing schemes (n.b. the other major international carbon pricing scheme can be found in North America involving California in the US and Quebec in Canada). In the US and Canada, states and provinces have the authority to establish regional carbon policies. However, while Canada has introduced a federal minimum price that has to be met, the US remains the only country that has carbon pricing schemes on the regional but not national level (Figure 1). 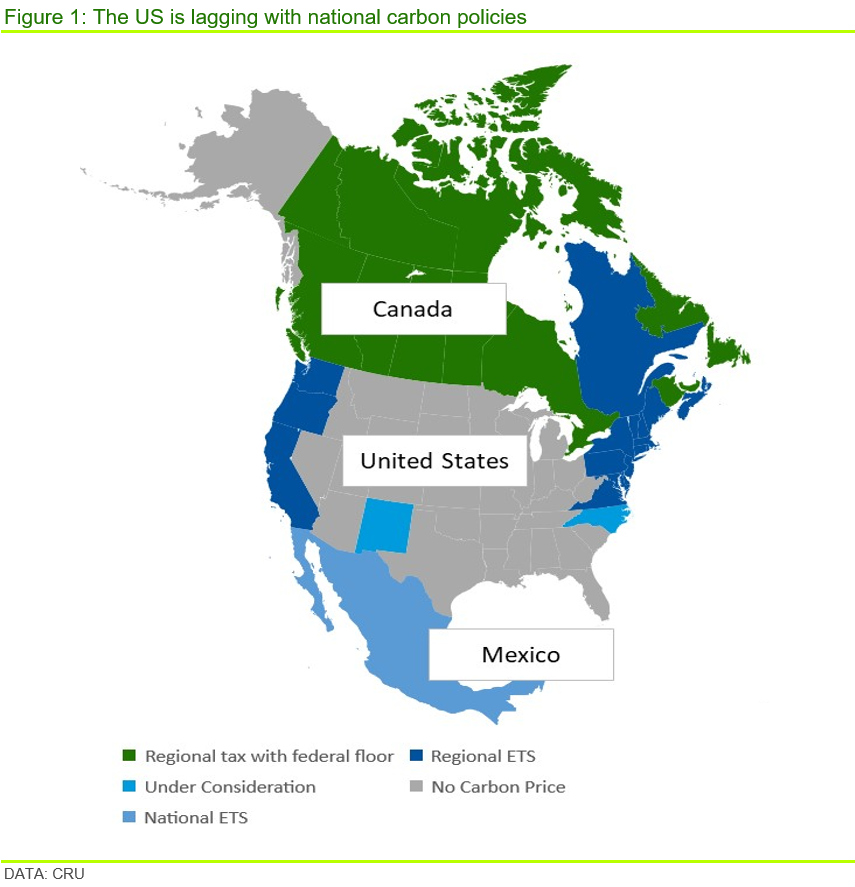 The prevalence of carbon pricing schemes across countries reflects different domestic political priorities and financing capabilities. This in line with their level of economic development but also wider “fair share” considerations with regard to the contribution they ought to make to mitigate climate change.

Finland, Norway, and Sweden, for example, introduced carbon taxes in the 1990s – many years before climate change became a major global issue. The EU and New Zealand set up their trading schemes in 2005 and 2008, respectively. By contrast, until quite recently, climate change mitigation was not a policy priority in most middle-income countries. However, this appears to be changing, with middle-income countries showing greater interest in carbon pricing schemes. China, for example, launched a national ETS in 2021 after piloting eight regional schemes for nearly a decade. Several middle-income countries including Morocco, Tunisia, the Philippines and Turkey are contemplating introducing carbon pricing schemes. Turkey trades closely with the EU and intends to introduce its scheme in response to the EU’s plan to introduce a carbon border adjustment mechanism. Interest in low-income countries remains close to non-existent, reflecting the fact that their contributions to global carbon emissions are negligible and climate change mitigation is less relevant to their circumstances than climate change adaptation (Figure 2). 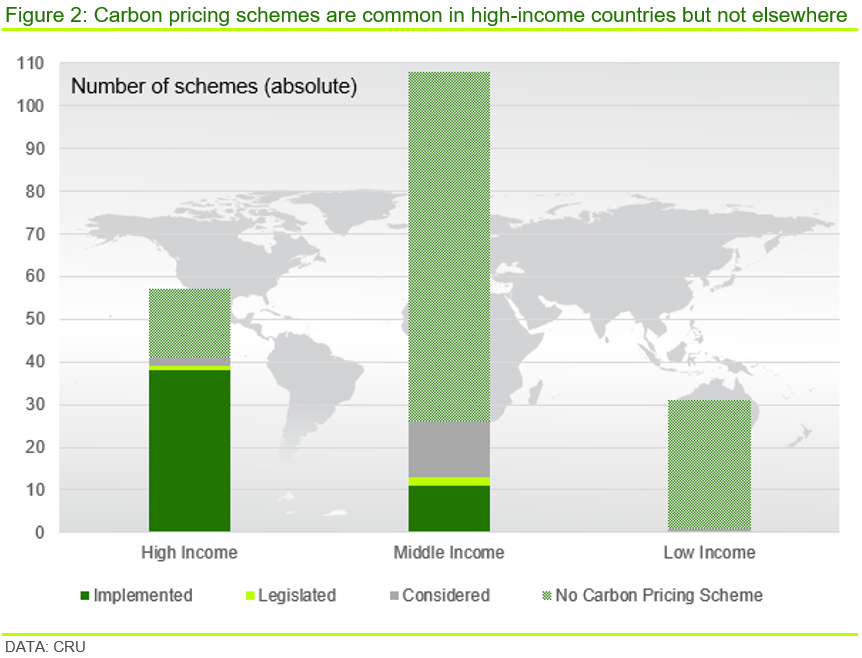 We also found that carbon pricing schemes can differ widely in terms of prices, coverage, the availability of free allowances, and exemptions. The latter three determine the overall scope and price of a scheme, with the effective price faced by the emitter being often significantly lower than the “headline” price because of free allowances or exemptions.

Carbon prices – either set directly by policymakers in the form of a carbon tax or determined through market forces in an ETS – vary significantly across countries. At one end of the spectrum, there is the EU ETS with a current carbon price of ~€90/t CO2 and a Swedish carbon tax of ~€110/t CO2. At the other end of the spectrum, there are Kazakhstan and Chile, for example, with carbon taxes of ~€0.93/tCO2 and ~€6/tCO2, respectively (see Figure 3).

Countries also differ in terms of future ambitions, with Canada, Norway and the Netherlands aiming for domestic carbon prices of ~€130/tCO2, ~€200/tCO2 and ~€125/tCO2 by 2030 respectively, while many others have no stated plans to go beyond what has been achieved already. 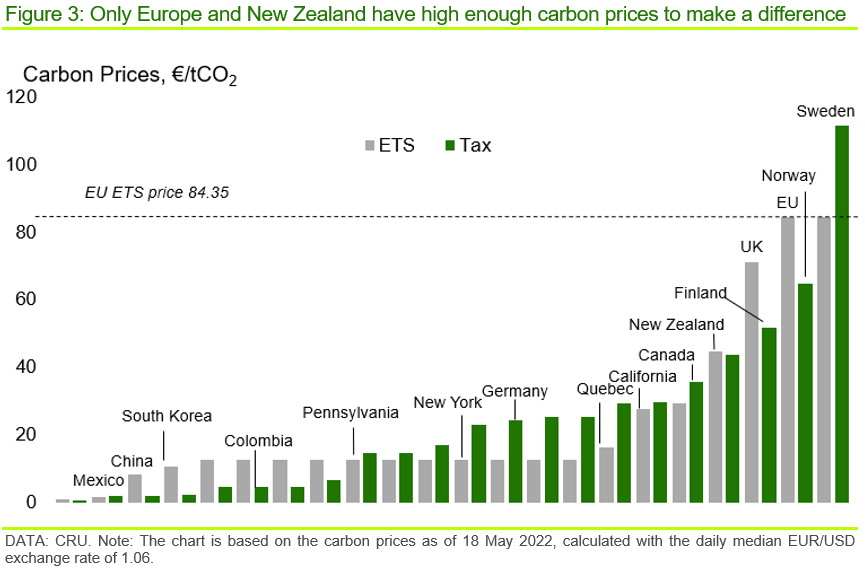 Carbon pricing schemes also differ in terms of coverage. In other words, the economic activities/sectors and pollutants covered.

In most cases, carbon pricing schemes only cover emissions from power generation and industrial production. Transport (e.g., road, shipping, and aviation) and residential housing are covered less often. Land use, including agriculture, is out of scope in all existing schemes. For example, the Chinese carbon market currently covers emissions from power generation but is expected to extend to some industrial process emissions by 2025, covering around half of total Chinese emissions.

In the case of those countries participating in the EU ETS (i.e., EU member states, Iceland, Liechtenstein and Norway), domestic carbon taxes generally complement the EU ETS in the sense that the tax covers sectors currently not covered by the EU ETS.

The scope of any existing carbon pricing scheme is also determined by the exemptions given. These exemptions are generally based on size (e.g., very small-scale polluters might not have to pay the carbon tax or participate in an ETS) and the risk of carbon leakage (i.e., exemptions are aimed at discouraging footloose emitters from moving to other jurisdictions with lower carbon prices).

An important type of exemption in an ETS are free allowances, often given to carbon emitters based on specific technical benchmarks or historical emission levels to cover at least some of the emissions. Free allowances are often given during the phase-in period of an ETS to soften the impact of the price shock on businesses. These are then withdrawn once the ETS has been established.

Carbon pricing schemes can also differ in their treatment of carbon offsets. In Colombia, for example, the existing carbon tax can be avoided by purchasing domestic carbon offsets. This has been criticised as Colombia has used low-quality offsets, which do not necessarily provide any environmental benefit. Until 2020, carbon offsets were allowed under the EU ETS, but with the EU ETS’s move to Phase 4 in early 2021, this is no longer the case.

For businesses in the commodity markets, it is difficult to understand the cost implications of these schemes

This makes it very difficult for businesses in the commodity markets to understand fully the cost implications of these schemes across their entire supply chain. Figure 4 shows the relationship on an aggregate level. 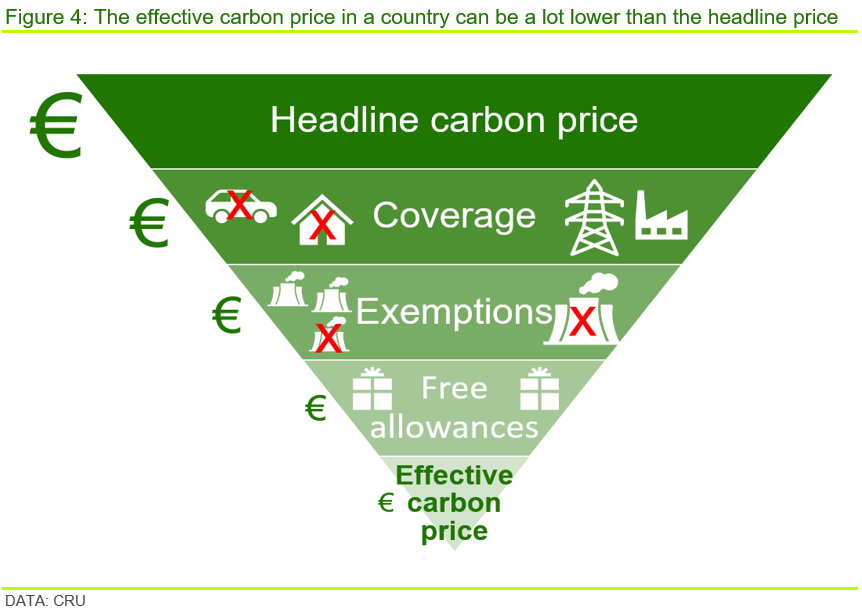 Carbon pricing schemes are generally regarded as one of the most effective ways to reduce carbon emissions. As such, it is not surprising that they play an important role in governments’ responses to addressing climate change. In countries with carbon pricing schemes, we are seeing a gradual increase in ambition, for example by raising prices, expanding coverage, and reducing exemptions. The EU ETS is a prime example, with policymakers currently debating, as part of the EU’s Fit for 55 package, the phasing out of free allowances and expanding coverage to include additional economic activities, such as transport and housing. As mentioned, numerous middle-income countries are currently contemplating the use of carbon pricing schemes. We do not expect low-income countries to introduce such schemes for years to come, not least as their contribution to climate change is so limited.

What is unlikely is a convergence of prices, coverage, and exemptions across countries at different stages of economic development. Most high-income countries are not only relatively big CO2 emitters, but they also have the financial means, and are economically diverse enough, to pursue more ambitious carbon targets than middle-income and low-income countries. For low-income countries in particular, climate change adaptation will remain a more important priority than mitigation.

If you would like to find out more about carbon pricing schemes, other policy measures aimed at mitigating climate change or carbon price developments, please get in touch with us. We are more than happy to talk.